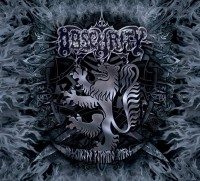 Sometimes we’re getting some surprising records here at folk-metal.nl. For example the self-titled album from Obscurity. While I’ve never heard of this band before, I initially thought ‘Obscurity’ was the band’s debut album. However, the band already exists for many years. Obscurity even is the 6th album from these 5 Germans.
Then the CD itself. What we get is that typical Melodic death-metal sound, as to be heard by bands like Amon Amarth and Unleashed. While a lot of bands could be called a direct copy of aforementioned bands, Obscurity clearly adapts their own style.
In this way, we can hear some more influences besides the melo-death. When listening to a song like ‘Strandhogg’, you clearly hear some punk / hardcore influences in a way the band Kvelertak does this as well.
The pacing is high throughout the whole record. The songs are strong, catchy, and invite you to headbang! For fans of Amon Amarth and Unleashed, but also for fans of Melodic death metal or even hardcore; Obscurity delivers a great record which is definitely worth checking out!