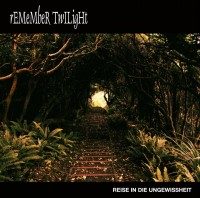 It’s only a little while ago I did a late review on the full length of Remember Twilight, and now we find te EP ‘Reise in die Ungewissheit’ in our mailbox. I ended my previous review with the wish I hoped there would be some more folk in this album. Let’s find out.
The album starts with the track ‘Das Geschenk’, and this is a gift at once. The chambermusic is still present in this song, and there’s not a lot of folk. But it’s a quite heavy track and this is a nice thing.
‘Ich Komme nicht Mit’ is also quite heavy and with this Remember Twilight seems to cling on to the heavy pieces of their previous album. A lot of violin and cello gives this song a good taste because of the nice contrast with the vocals.
The third track of this album ‘Fleish + Blut’ is a very fine song. Again the violins and cello play a huge role in the song, but it has also catchy guitars and a very nice bass-line. The songs has good changes in it which makes this a very delicious track.
For the cello fans, the track ‘Welten zu Entdecken’ starts with a nice melancholic cello part. The whole song has this melancholic feel in the beginning by the way. But then it picks up to a nice speed and it has all kind of elements like ‘choir’, growling and nice cello parts. Again a very nice one.
Leaves us with only one track to go ‘König Koks’ which is a very loud one for Remember Twilight, almost punk-rock with again these nice violins and cello. This track features Marcus Stock, who you might know from Empyrium.

Is this one more folky? No, it isn’t but it’s definitely nicer than the previous album. The songs for this EP are nicely picked out. They’re all of the quality of the better songs from ‘Musik über Niedergang & Verderben’. Still the main influences outside rock, punkrock and metal is chamber music, but it’s all a bit more spiced. The average sound of this EP is slightly louder and with more raw edges then the previous album. I like it. I don’t know where their journey is leading them to, but if it develops in this direction, I’m with them.