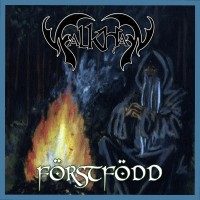 Förstfodd is the first release of the Swedish folk-metalband Falkhan.
The record starts with the song Förstfodd itself. Falkhan makes music in the same genre as Finntroll, rough but still danceable music with Swedish lyrics.
To be honest, Falkhan doesn’t sound really innovating, but it’s quite catchy and they would do fine as an opener on many concerts.
The second song, I runor och ben, reminds me very much of Finntrolls Nedgång. I find this a lot on this record, it sounds like Finntroll, and a bit less like other bands which make trollish metal too. So if it’s up to me, it’s the 101th band making the same music.
But I think it’s definitely a good thing that the lyrics are in their native language, Swedish.
I must say, as well, all songs are extremely suitable if you want to get a crowd moving, this makes Falkhan a good opener on many small tours.
In the song Skugors Son is a nice semi-acoustic intermezzo, making the song a little bit more Falkhan.
Femtio Vintrars Sorg is my personal favourite on the record, which is actually quite a good song. They should definitely write more of these songs.