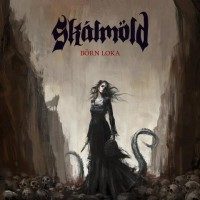 Pleasantly surprised was I, when I listened the debut-record from Skálmöld for the first time. A unique sound, where beautiful melodies stood in sharp contrast with the raw vocals. This year, The Icelandic band releases ‘Börn Loka’. I’m curious if they could met the high standards they set themselves..
And the answer is a definite yes! This time there’s also chosen for a concept that covers the whole album, making every song part of a bigger whole. This time, the story told is about the mortal Hilmar, who is send out by Odin to kill the children of Loki. I can’t tell you more about the concept, since my Icelandic is not good enough to understand the lyrics.
On to the music itself! Skálmöld releases a really powerful record, with variety being the main focus of the album. For example ‘Gleipnir’ which is almost a typical folk-metalsong, but the band also shows that they’re not afraid to take inspiration from other genres. Take for example the song ‘Midgardsormur’, which sounds really thrashy halfway through the song. Also black-metal seems to be a source of inspiration in a song like ‘Fenrisúlfur’.
However, while all these songs have a different sound, they maintain the typical, eccentric sound of Skálmöld. Beautiful melodic guitarriffs, playing a lead role together with the raw and harsh vocals of Björgvin. Sometimes the vocals are interchanged by epic choirs, only to complete the total sound more and more.
Luckily Skálmöld stays on the same level that was set by their debut ‘Baldur’. This album is slightly more diverse and harsh than its predecessor. Skálmöld, for me, stays one of the better bands in the folk-metalgenre, something that they aren’t going to give away easily with ‘Börn Loka’ released. Certainly worth listening!