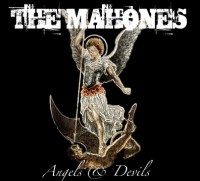 The Canadian Celtic punkers The Mahones are coming up with a new album ‘Angels & Devils’.
We’re immediately on our way, on the Shakespeare Road as a matter of fact when the album starts. And if this is the way we’re travelling on Angels & Devils, I can tell you, I like it. Let’s move on at this high speed with true Irish folk in a punky way.
The second track of this album is the title-track Angels & Devils, the tempo is slightly less and it’s all a bit more rock, but again a very nice one.
And we go on with the Spanish Lady this time, we take up speed and it’s almost impossible to do this faster and this sounds great. Ken Casey of Dropkick Murphys appears as guest-singer in this song. One little problem with this one, you can’t sing along because it’s so fast. The Irish sound is dripping of this nice song.
The we get a nice medley of nice Celtic punk songs, nice speedy track, with a lot of traditional folk in it.
But after this it’s time for a little rest, the very nice track Angel Without Wings / Merry Christmas as you may expect from this title it’s indeed a Christmas song. And if it’s up to me, it’s going to be played the whole of December on every radio-station because it’s a great song. In style of the famous Pogues Christmas-song Fairytale of New York. Felicity Hamer (United Steelworkers Of Montreal / Filly and The Flops) is the one with the lovely female voice this Christmas.
In The Waiting The Mahones are assisted by Jake Burns of Stiff Little Fingers on lead guitar (just like in Angels & Devils), and his influences can be clearly heard, again a slightly less Celtic song, but it’s also nice.
After visiting The King Of Copenhagen, which was a pleasure, we get to Past The Pint Of No Return. Very, very nice drinking song this is. If this is how things go in an Irish pub, what are we doing here….
And then it’s time again for a nice medley, again Irish folk-tunes at high speed, love it….
And if you’re not drunk already we get on the Whiskey Train together with Rene D la Muerte and Colin Irvine (The Brains) on Lead Guitar and Stand Up Bass. Again a song which is somewhat less celtic and somewhat more rock.
I can’t imagine we can start a riot when we are as drunk a we are by now, but still The Mahones are starting one with The Revolution Starts Now. A song with nice whistles which gives this track this nice little Celtic touch, because it’s a nice punk song really.
Makes No Sense At All, I thought so, but this is not the fact with this album. It make sense.
And when we’ve listen to all of these ten songs including two medleys we also get the bonus track Tin Soldiers which is a tribute to the Stiff Little Fingers. Again a very nice song which fits perfectly on this album.

Angels & Devils is a very nice album with beautiful songs on it. he only thing I like a little less are a few tracks which are somewhat more rock on this album. These are also nice tracks, but they can’t keep up with the rest of the album. The medleys on this album are great, the Christmas song is one of the best modern Christmas-songs I’ve ever heard. And Spanish Lady and Past the Pint of No Return are definitely songs for the playlist with my favourites.
One of the best albums I’ve ever heard in folk-punkworld. Dropkick Murphys and Flogging Molly are no longer the two big ones at the top. The Mahones have levelled themselves to their size with this album.