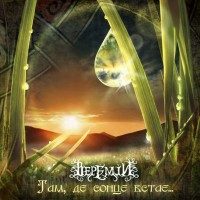 Veremiy is a band from the Ukraine which I didn’t know until I got this Album. The music of this Ukrain band is not folk-metal, but more folk-rock. But when this is hard enough, this should be no problem for my ears!
This album is a kind of book about Kievan Rus. The story develops in the XII century, during the famous march to Prince Igor Polovtsian as described in the famous “Lay”. You find yourself amidst of action: there predicted the eclipse of the sun, and impenetrable forests and clear lakes, Lost River, fogged mountains and the imaginary journey with wolves and birds, walks with Nymph and ghouls, whispering grass and morning dew touch with unconquered land. You become part of this and feel that energy, which passes through the prism of our entire history, from pre-Christian Russia, Cossacks, and up to the present. The songs face issues of the Ukraine of today: environmental issues, the social issues, but it also revives forgotten legends, stories, etc. The album is permeated with the spirit of Ukrainian different historical periods. You can feel ancient Ukraine with this album.
The intro starts quietly with a kinds of wind and builds up with acoustic guitar to become somewhat heavier at the end.
Veremiy brings us rather solid guitars, clear whistle through it all and somewhat melancholic male Slavic vocals. When you increase the volume it sounds somewhat heavier, but you can also listen to this music at a much lower volume and it remains nice.
The track Kolyskova reminds a bit of an Metallica playing acoustic, but the singer has a more velvet voice, which feels nice and warm. And everywhere you notice the nice skills of the musicians, playing all instruments very well, but it gets a little bit to neat and tidy sometimes.
My personal favourite on this album is Tyhyj Gay, a nice songs, with this nice full Slavic voice. The song has a kind of warmth like handmade blanket and sitting by a warming fire Veremiy tells us again a nice story.
The album end with Zagrava and the sounds of Ukraine wind are back again, the violin ends this story in a nice melancholic way.
Then there are two nice bonuses. The second one is an other version of my favourite.

What can you expect with this album of Veremiy? Let’s be clear about this, all the readers of Folk-metal.nl who are totally into the ‘heavy stuff’, don’t even have to listen to this album. But everybody whose interest lies in all kinds of folk-music, should give it a listen. There’s indeed a lot of folk on this album and it’s all done with great skills, the compositions are nice, played by skilled musicians and all in this nice Slavic atmosphere. I like this album, although it could have been somewhat heavier in my opinion. But this is clearly not the intention of Veremiy. Still I’m looking out to a next album of this band, because it’s all really nice.