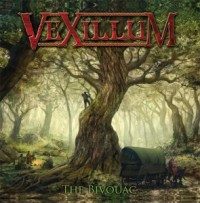 Interested in the power side of folk-metal? Fan of Elvenking and Skiltron? Then Vexillum is definitely something for you! That’s the reason why this album is brought to me, and it made me really happy!

The Wanderer’s Note is at first a beautiful intro, a caravan of people marching while whistling a merry tune, this all turns into a very epic and powerful opening.
And thus the album starts very power, in the first place the music reminds me most of Blind Guardian, but honestly, with a better singer. The guitar is fast with many riffs as you may expect powermetal to be, the vocal work is clean and high and the tunes are catchy.
Finishing the first song, we hear the caravan marching on.
After this Dethrone the Tyrant starts, fantastic guitar riffs again and as well a very heroic keyboard on the background who sound like there’s much to happen. Now will come clear during the lyrics of the song that that as well is the case. But to be honest with you, the only negative thing in the music is the Italian accent in the English every now and then.
I pass on the the third song, Dancing Goddess, because this is by right the very best song from the record. A song with all the Vexillum aspects in it, inclusive a folkloric intermezzo which forms a beautiful contrast with the fast powermetal.
After this, there will be much more folky influences everywhere through the songs.
To start with The Oak and Lady Flame, this is acoustic for over 2 minutes, after that there is metal and this combination makes this song to get goose bumps from!
The Dream is a entirely acoustic folk song that shows us these powermetalheads are up to way more than only metal, as well this forms an brilliant cooldown moment between all the fast songs.
After this the fast songs go on and on ‘till the end of the album. All these songs are from good to even better. This is improving my mood immense. This album is a collection of true musical masterpieces.
The Last Inn is the last song on the record and it’s a “grand finale” as the Italians would say, because this Inn is coming on full speed through your boxes!

Conclusion, buy it, now! What an amazing CD is this. After Elvenking, Vexillum grants us an wonderful album this year. This is definitely a very good year for the Italian folk/powermetal.