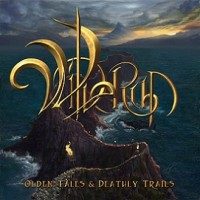 It took to 2012 for them to get their line-up completed, but immediately after this, they released a début-album. And when you think this is not a wise thing to do, in this short terms, you’re wrong. It’s one of the best début-albums I have ever heard.
They hit of with a nice instrumental intro, could be the intro for an epic pirate movie or something like that.
The second track Suncatcher reminds a bit of Turisas, the epic way the song is build up is very good. I forgot to tell you Wilderun is an American band, usually this means it’s all very neat and clean and filled with keys, choirs or strings. And Wilderun is no exception to that, but it sounds nice. The orchestral sound is very well done, with great skill and eye for detail.
The tune of How stands the Glass around is really awesome in this short track of only 4 minutes. Wilderun goes for the long stuff and this is no wonder they’re telling complete stories and every song is almost a soundtrack of a film. The last track of the album is even longer, forget the five seconds and it’s 13 minutes long. Boring, no it’s never boring. It’s Epic!

This is one of the very best début-album I’ve ever heard, it took Turisas a couple of years to reach this stage, but Wilderun does this in a much better way. I’m usually not a fan of the smooth ‘American’ sound but I’ve deep respect for what this guys are doing. This album has the feel of Wintersuns début-album. I don’t know what you can improve when you’re releasing you début, so I can only rate this album with the full TEN points!