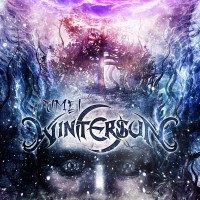 Wintersuns’ debut-album became a classic in a very short while. A song like Death and the Healing can’t be done better. After this it became silent around this project until Jari and his band joined the Heidenfesttour in 2011. Not completely true, because there was some action a little while before. Wintersun announced he was working on a new album. But after this it was quiet again for a long time around this band. With Wintersun everything is done in Time, so it seemed very obvious his next album would be entitled Time. He added a ‘I’ to this, because there will be a second part of this album released in 2013.
But finally there’s a new album. But can it beat the previous. The answer is simply No, it’s a strong album although. There are only five tracks on this album, one long track and two very long tracks.
When Time Fades Away is an easy instrumental intro to the album. Not bad at all, but nothing special either. The second track although is a very strong one and it’s over 13 minutes long! Very nice vocals, good choirs, catchy guitars, nice composition, 13 minutes of great fun.
The next song Land of Snow and Sorrow is not that catchy, the orchestration are somewhat large and the rest of the music is a little bit drowned in this.
Darkness and Frost is a kind of intermezzo, restrained, epic, and it works towards the last track Time. This is again a very long track of almost 12 minutes. Not by far as exciting as the second track of the album but very nice.

Wintersun was at his best with the somewhat longer compositions, and he has exceeded himself on this record. The compositions are very nice again, but it’s not everywhere as exciting as the first album. Only Sons of Winter and Starts can keep up with his first album in my opinion. But this album is also a ‘must have’ for the many fans of Wintersun and there won’t be many people who don’t like it.