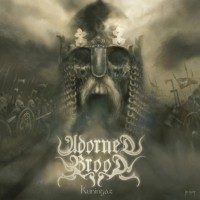 Adorned Brood. A band which is already playing since 1993, but has never been better than the mediocrity. Al 7 studio-albums weren’t more than just ‘nice’. Good to listen to for a while, but never more than that. Could Adorned Brood, with their 8th record, finally leave the stage of mediocrity, and improve themselves in such a way they could compete with the more popular bands of the genre?
While ‘Kuningaz’ is a great step towards the right direction, I don’t think this record would mean the breakthrough of Adorned Brood. What we get is harsh, solid folk-metal, with raw clean vocals in German and English, usual melodic guitar riffs, completed with flute melodies.
The songs are catchy in general. Compared to older work, Kuningaz is a bit more brutal, and sometimes even influences from Thrash or –core could be recognized. However, typical folk-metal still dominates on this record. Naming a band which sounds similar to Adorned Brood, I would name a band like Varg, or maybe even Svartsot. While these bands share similarities, it doesn’t really cover the typical musical style of Adorned Brood.
Kuningaz is a step in the right direction, especially compared to the mediocre work they used to deliver. It’s easy to listen to, and the songs are composed quite decently. However, I remain to ask myself wether this band could ever meet with the qualitative better releases of other bands. Descent record, but nothing more than that.