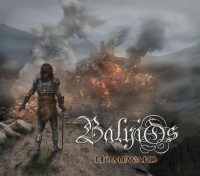 Folk-metal is conquering the earth, and we have another example of this: Balyios. Folk-metal has reached the African continent. Melodic folk-metal is pounding South-Africa these days and Balyios is forging it.
After a nice intro we get ‘Nilfheim’ which was also released as a single a little while ago. Nice catchy metal. No authentic instruments like bagpipes or whistles it their music. The keys are doing this duty, but this fits. It’s all kind of melodic which suites perfectly with these keys.
A song like Elder Bliss reminds a bit of a band like Finsterforst with the use of this accordion sound. This is a feeling you get sometimes when listening this album. A lot of influences from other bands can be heard, without becoming a copy-cat. They have used all these influences to create a lot of decent tracks.

It’s all very nicely done with catchy guitars, good metalvocals, straight solid, little bit predictable every now and then, but overall good solid work.
Tracks like Nilfheim, Valhalla and Enter Euphoria clearly stand out, but this doesn’t mean the rest isn’t good. But there are also no real surprises on this album, it’s solid. Nice work for a first one. I doubt if they will conquer the world with it, because it’s not totally new. But I guess there aren’t a lot of folk-metal concerts in their region. And then we have a band on our hands which has great music. So as a substitute for all the bands we know they have a great band in South-Africa.
And they can sell some albums in the rest of the world as well. For the fans of folk-metal with a melodic approach, Balyios is a decent band.