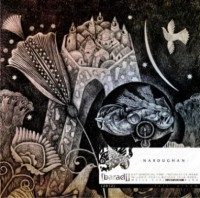 It still exists! An album cover which grabs you in a way that you definitely want to know what the music is like. That a terrible good record is hiding behind it, is always a great advantage!
While I’ve never heard from this band, it seems that they’re already started in 2003, releasing numerous EP’s. However, Nardughan is a full length, and in almost 50 minutes they show all that they have to offer. And that’s a lot. While the Bulgarian band classifies themselves as being a ‘post folk-metalband’, this term might be a bit too vague to describe the music.
Musically, I think it might be described as a passionate affair between Opeth and Dalriada, with Alcest joining them once or twice. Ok, I can understand that some of you still don’t quite get what kind of music Baradj is. In contrary to their previous work, which was more progressive (post) folk, Nardughan is more straightforward folk-metal. Catchy, easy-to-listen-to folk, with a juicy, epic groove which sometimes almost sounds like melodic death-metal.
While the musicianship is of an exceptional high level, the vocals are also more than descent. Female vocals serve a lead role, nicely interchanged with deep, manly grunts. Don’t immediately think that the female vocals have the upper hand; all is in perfect balance on this release.
I can go on for hours about this release. While the band doesn’t use any traditional instruments or keyboards, Baradj captures the true essential of folk-metal. Sometimes brutal, swinging and grooving, sometimes happy and cheerful, sometimes subdued and timid. With this release, Baradj shows that they can be really diverse, without losing sight of the greater whole.
I can be short about this. Listen to it, and be convinced. I’m a fan!