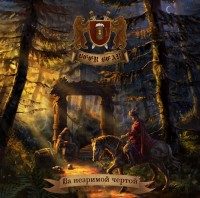 Beer Bear has released a new album again. And Beer Bear is a little bit weird band. They have great songs, but they also manage to create some which are not the best.
Beer Bear is an unusual name and the conclusion they make songs about beer and bears or bears drinking beer only is easily made. But not all songs have this theme.
What catches the eye with this one is the CD and its artwork. This is all very nicely done. There’s a very nice booklet with lyrics and beatiful drawings. It’s all a little bit dark, which you wouldn’t expect with a band like this. I hardly can’t wait to listen to it, will it be less happy? The artwork seems to tell us this.
The Intro is at once such a track, we can hear the wedding march, not a very nice track, but it’s an itro for the second track Bears’ Wedding Day a nice song about….
A nice song like we want to hear from Bear Bear if it wasn’t for the intermezzo with again this wedding march, which forms a slightly less part of this song.
Fire-Mead, is indeed not about beer or bears, but it is a nice song. It has all nice elements we know from this band. The nice vocals, merry music, it has this funny sound everywhere. And the female vocals every now and then are a nice addition to the music.
Drink and Revel, Bears’ Gentry! Start with a violin but when the other instruments join in, you can feel the change to another typical BB-song. Again catchy guitars, nice violin, merry tunes with an comic touch. We get female vocals this time. Nice, nice, nice. A very good song, I like it a lot. All songs have a kind of blunt bearlike feeling, which gives the urge to move with the music.
Folk-n-Roll is a song we already know from their previous EP, not my favourite but nicely done. A real rock’n’roll song with fiddle.

After this it’s time for four long tracks the title-song, something you wouldn’t expect with the happy songs in the beginning of the album. Are we going to get an very different songs with these four tracks? Yes, it seems so. The first long one is the title-track Beyond the Invisible Line. It’s a nice composition with enough changes to avoid boredom is such a long song. We get to see the serious side of Beer Bear and despite I don’t think this is a very good one, it’s a decent song.
The next track Holger Danske is another serious song and this one sounds much better, the aggressive vocals sound also very nice. And it seems we the more serious side of Beer Bear has to be taken into consideration as well.
Slightly shorter is the track Twin Soul with again Eugenia singing. Again a nice composition.
The last track is a typical Ukraine folk-song, very nice, it’s a kind of bridge between the both sides of Beer Bear we can hear on this album. This one is again long but shows a little bit more of the humorous side of the band.

Beer Bear has again made a very nice album with this one. It has two faces. It starts with the usual funny side of Beer Bear, don’t turn it off immediately with the intro, this is the worst part of the album. After this we get good old Beer Bear music, funny, little bit blunt, very nice. After the intermezzo Folk-n-Roll we get a whole other side of Beer Bear. Serious music, but just as nice. Beer Bear proves it’s not only capable of writing funny songs, but is also capable of writing nice serious ones. And then there’s this nice folktrack Na Zielonej Ukraini, which show we deal with a multi-talented band here.
And as a nice bonus there are two bonus songs.
The artwork could be a little brighter but the fact remains this album has a very beautiful cover.