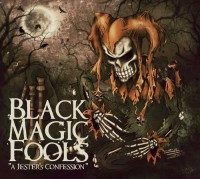 It’s nice to be a reviewer on this cold and misty days. You stay inside, what else can you do. Some people put a fire in their fireplace, I put ‘A Jester’s Confession’ in my CD-player and….
We both get warm.
Their début EP was a nice one with three medieval rock songs and a weir one. We were already very curious about this next one.
A Jester’s Confession is a tale about a Jester who suddenly isn’t happy any-more and takes a life. This also doesn’t make the man happy and when you read the inside of the cover you know why…
The intro is a nice one, starts with a kind of medieval rock as we know from this band, but it has more. It has this nice sound as we know from the Swedish band Fejd, it goes down your spine and you get really worked up with this song. Very good intro.
But there’s more. Dansa I Natt, what can you say about this. This is a superfantasticfabulous song, it has again this beautiful, let’s call it Swedish Sound. The lyrics are also in Swedish and can be translated to Dancing in the Night. And along with the skeleton on the cd-cover it has a kind of Halloween feeling.
The intermezzo Döden is the one that follows on this. A very short track which has nice bagpipes in the end.
Before I Reach Hell en A Jester’s confession are pretty much a rock songs, they’re not one of my favourite songs on this album, but fortunately they’re followed by Santa Maria.
And this is another very fine song with nice hurdy gurdy and a nice rock sound. It’s quite a loud track, but it has all kind of elements in it. One moment you’re listening to a pure rocksong and suddenly you get a lot of medieval sounds and then it’s almost metal.
In Spelmannens öde we suddenly get Swedish female vocals, which gives it all a very Scandinavian touch. A beautiful slow song with nice violin-parts in it. I suddenly want to get the fireplace burning, but I’m warm already.

With A Jester’s Confession Black Magic Fools show what a huge progression they have made. The previous EP was already nice, but this one is very good. On the first one it was all Medieval rock of the same kind. And I don’t mean alike, but they are in one gear the all time. On their second EP they show they have many different sides, but they never deny their own sound. This is a very nice EP, and Dansa I Natt is a very beautiful track.