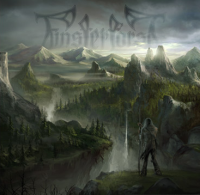 Imagine.. It’s a cold winternight, you’re walking through the forest and a full moon is shining through the trees, enlightening your path. This is exactly the feeling I get when listening to the new Finsterforst. Who thinks solely of Moonsorrow when thinking about long songs, might think again; Finsterforst is just as good composing some really long, epic folk-metalsongs.
And they are long! With a duration of 77 minutes, and with just 7 songs, the fan of longer songs could really indulge with this album. Especially Flammenrausch, with a duration of almost 23 minutes, has become a real masterpiece.
The strength of this band is that their songs are long, but they fascinate for every second. Atmospheric passages, interchanged with typical pagan black-metal. Not only the length of the songs is inspired by Moonsorrow, musically the influences of Moonsorrow are clear to hear. Where on the last few albums the accordion had a more prominent role, this time it’s pushed more to the back, serving a guiding role for the music.
Aren’t there any negative aspects on this album? No, actually not. Finsterforst delivers a mighty interesting album with Rastlos. It catches you, in a way it never lets go, and you can listen to it for numerous times after each other. Highly recommended!