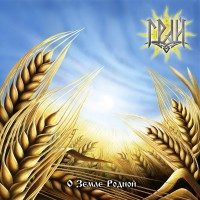 Grai is an nice Russian Folk-metalband which music is filled with folk. They released this second album in 2011 already, but they have signed with Vic Records in 2012 where the album gets released for all of us in Europe.
Grai starts off with ‘The Wheat Song’, a very nice song, with a lot of their native folk in it.
Grai manages to put their native folklore into rock and metal. It’s almost impossible to speak about folk-influences with this kind of music. It’s sounds like folk, but of a very loud kind.
The second song is about their native land. And you can only say one thing about this: ‘Why don’t we all live there’.
And this goes on with the song Spring in which there are also nice Slavic female choirs, just like their supposed to be in their folk-music.
A Winter Tale on the other hand is not as merry as the previous tracks, but just as nice. A nice melancholic song which doesn’t have the speed of the previous song.
In Leshak there is this nice heavy low Russian voice, like we all know. Typically Russian and o so nice.
After this Grai takes us to the middle of the Forest, we go there accompanied by some whistles. When we arrive their we get these nice Slavic girls singing to us and the whistlers gets excited to. The vocals in this are great, the combination of these clear Slavic female choir matches perfectly with the low male voice. Nice guitars, thriving but still subdued. And in the second half of the song it all gets a lot stronger and wilder.
Lament about The Lot has nice flutes and again great vocals, nice catchy guitars and is again a really nice song.
For the fans of the female Slavic choirs there’s the song Leave us, Sorrow. Good strong guitars in this one and a very nice bass the whistles give it all this thick Russian folk-sauce.
At the first notes of Brave Warrior you know this is going to become a solid track. And it is, nicely done with these female clear vocals and this dark and grim male voice.
The last regular track from this album is Get up From Your Knees. The Russian Pride is dripping of this song.

Grai is a band for the fans of Slavic metal. Grai is totally different from a band like Arkona, but the Russian touch maybe even larger. Grai stays closer to their native folk, where other bands mix folk and metal, Grai plays metalversions of folk.
A very good album by Grai, they have managed to maintain a high level of quality during the writing-process of their songs. It’s difficult for a lot of bands to produce an second album with songs of a good quality. Grai succeeds in this. Maybe the album lacks a hitsong, but there’s also no track on the album which is not so great. So this is simply a very good album by Grai.
I think it’s about time they come to Europe soon.