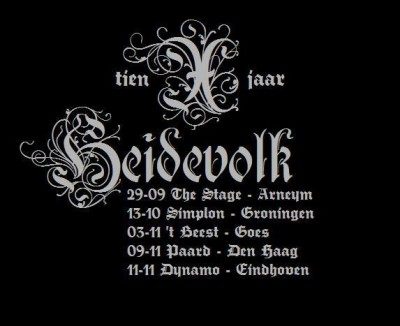 Heidevolk exists for 10 years! Reason enough to celebrate this with several concerts. Dynamo in Eindhoven was the last in a series of 5 concerts to celebrate Heidevolks birthday. And I can be short about it; the show was close to perfect. Just to be sure, I’m not going to talk about the boring support act Nymeria. While they played well, it was utterly boring and couldn’t fascinate for even a tiny bit.
So, back to Heidevolk, because that was the main reason that quite a lot of people came to the Dynamo on a Sunday night. While the overall sound could be better, this was a typical show as can be expected from Heidevolk. Executed to perfection, a pleasure to look at, and it’s always a great joy to sing along with all the songs of this Gelders sextet.
While the show was close to perfect, as almost to be expected from Heidevolk, still some surprises occurred. These surprises were mainly found in the setlist, because who had ever heard songs like ‘Hengist & Horsa’ or ‘Vale Ouwe’ live? Furthermore, the setlist was a perfect view on 10 years Heidevolk, with all 4 albums equally represented. That the audience couldn’t care what was played was proved by the reaction of the audience. No matter what was played, the audience enjoyed it and went completely crazy on each song.