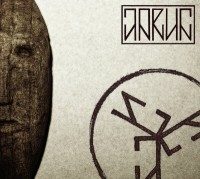 Okay, I can manage to speak out Jarun. But the album title isn’t gonna work for me. But I bet these Polish can.
When I turn on the CD I think “rise my brothers, rise from your graves!” and this thought is quite a disappointment because it is Primordial and I hoped to hear something new. The long part without many accords, the changes between soft and loud and the acoustic guitar, it just sounds like Primordial. However the vocal work doesn’t remind me of them at all. Not that this sounds like Jarun, the vocals sound more like Folkodia. Two songs long Jarun sounds as an combination between Folkodia and Primordial, but then this changes. The third song of which I cannot speak out the name, reminds me of Suidakra. This gives us the three main ingredients for Jarun.

But after this song, we get something new, a long acoustic intermezzo. It’s nice, although it would’ve been better when a whistle in it, because after a while, I’m losing my interest to this tune.
The for last song, Zamieæ is different from everything we’ve heard before, though it still fits in the album. This song sounds much more blackmetal, more the way like Kampfar. But because of the acoustic guitar, it still forms one sound with the rest of the album.
With a long atmospheric tune we come to the end of this album.

In the end it wasn’t that bad, but neither was it good. It’s just one of many albums. But please feel free to look them up, and listen for yourself.