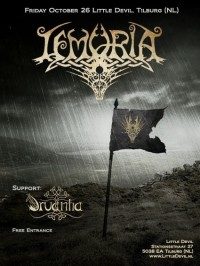 The Little Devil in Tilburg seems to be the place to be nowadays. In a city with many venues, it’s notable how a small rock café usually brings the best evenings. In this case it’s a folk metal night, and not just any. Local heroes Druantia open for the Belgian legends Lemuria.

Druantia
It’s clear Druantia is playing a home match. From minute one, the place is filled with friends of the band, which makes for a great atmosphere. Full of confidence, they play a truly great show, at which the audience won’t stop moving. Druantia really keeps developing as a band, which is noticable at every show they play. The level of their own songs is remarkable. Almost every song is on itself an instant classic. In combination with covers like Trollhammaren, Wooden Pints and Wickie the Viking, this makes for a show which every folk metal fan will appreciate. Another strong point besides their own songs and covers, is the interaction with the audience, which both frontman Rik as guitarist/fluitist Lotte take care of. The enthousiasm is really clear and you can see the lady and gentlemen of Druantia enjoy being on stage.
Score: 8.5/10

Lemuria
With the audience all warmed up, it was time for the headliner: Lemuria. I’ve seen them once before, on Drakkarfest, also in Tilburg. They already proved there they are perfectly capable of dominating an evening, and in the Little Devil this was not much different. At the soundcheck th audience was already hard to contain, and after the intro, when their first song, ‘A Coming Storm’ started, the party really broke loose. Lemuria is quite a professional band, and they reflect it really well. The songs are both complex and grabbing. Combined with an awesome stage presentation and good interaction with the audience this makes it a true highlight of the evening. When, after the show, it appeared there was still time left, Lemuria decided the party wasn’t over just yet, so they played an encore, at which the audience was invited up on the stage. At the end the last moshpit died out and Lemuria was given a very well deserved applause. A great show by a great band. I’m going to be there when they play more often!
Score: 9,5/10

The Little Devil always is a guarantee for a good night, but with a line-up like this you’re sure you don’t want to be anywhere else. I’m hoping to see a night like this again soon. When that time comes, I’ll be there at the front again. To both Druantia and Lemuria, many thanks!