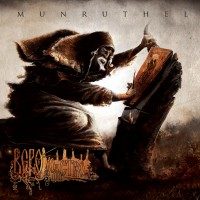 The Ukrain soloproject Munruthel releases his fifth album. Earlier this year I reviewed the ambient solo-project of the same person, but with a different name Silentium, and rated it with only 4 points. Michel reviewed his album ‘Epoch of Aquarius’ and was much more enthusiastic. I didn’t have to be so sceptical when I started because this feeling disappeared immediately with the first song. I only could be excited about there was to come!

CREEDamage is an album which can be listen to rather easy. In a musical sense there aren’t a lot of surprises on the album. It’s all very organic and everything matches. This doesn’t mean the songs aren’t interesting, with each song Munruthel proves he’s a very skilled composer and musician. There are influences from a lot of bands in this genre. The intro for instance, Ardent Dance of War’s God, does immediately remind you of Finntroll, to change after this in a song which reminds the most of Arkona.
This isn´t completely strange, because CREEDamage has some guest-singers Masha ‘Scream’ of the Russian band Arkona and Wulfstan of the British band Britse Forefather. They´re invited to sing some of the clean vocals on this record. These songs are the most outstanding in my opinion, because of their character. With the songs Masha sings, I had to listen twice to be sure I wasn´t listening to an Arkona song, which may be looked at as a compliment. Wulfstan does the vocals on The Lake, a Bathory-cover which almost exceeds the original. A beautiful cover which hasn´t left my head since I heard it that first time.

The album is put together very well. It´s not the most memorable record, but it´s every time again very enjoyable to listen to. The biggest improvement could be made in the drums which are somewhat artificial every now and then. This doesn´t cause this record to be any less, although. The compositions are very good and the lyrics are catchy. A good record when your´re in the mood for straight-forward folk-metal.