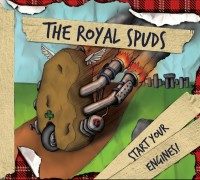 Ladies and gentlemen, from the united city of Leiden we proudly present to you, the Royal Spuds!
Start your engine!
I think this intro says enough!
We’re gonna face a party CD with five drinkingsongs that everyone will recognize.
Punk with Irish influence sounds good to me, so let’s start your engine for this!

A heavy bass plays already but before you know it a banjo has got into it, and then an accordion. The first song is Morrison’s Warriors, the music is clearly inspired by Irish folkmusic. So the first tune you hear you’ll all recognize as a typical Irish tune. A pretty good start, but without any vocals. Still I’m really enthusiast about this work, you can’t hear that this is just their first EP. The mix is good and so is their sound!
Come out ye black & tans is the second song, it reminds me of The Irish Rover, but it’ll be the heaviest version of it that I’ve ever heard. A lovely song and this time with lyrics as well. Most of the times with these folkpunk bands, the vocal work is the least part of it, but this is really good!
With the second song I know for sure that I’ve done myself a great favor by asking to do this preview!
In this third song, Last Call, The Royal Spuds show that they can as well play a real sensitive song. You’ll be touched by the story of this lonely man with nothing left, only his pub and his liquor.
Fortunately all sadness will be left behind with Finnegan’s Wake, a song that many fans of Irish folkmusic will know because of the common know version from The Dubliners, but as well in the folkpunk genre this tune has been played before by the Dropkick Murphys. But to be honest, I prefer the version of The Royal Spuds, above the Dropkick Murphys’
With Malt Inn we’ve reached the last song of the EP. A fantastic party song as we’ve heard more on the record. Again a song a lot of punk, but even more Iris folk sounds on which a crowd can go insane! After listening to this EP a few times, I’m as well able to sing along with the lyrics, that sounds like a big + to me!

I hope everyone has some free space in their CDboxes, because you really can’t miss this first EP from The Royal Spuds. Not if you’re a fan of folkpunk, partysongs, Irish folkmusic or just everything that’s coming from our beautiful country of The Netherlands!

And one last thing, Doctor get me stout!