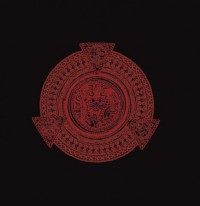 I don’t know many Icelandic bands, in fact the only folk or pagan band from this beautiful country I know is Skálmöld. Both bands are heavenly influences by old Icelandic poetry. Skálmöld has done a great job at this. Every now and then there can be heard some similarities between these two bands, which is the influence of this typical kind of poetry. But Árstíðir Lífsins creates entirely different music. Their music much darker and the sound is very harsh.
The first track of this album is fabulous. It has a typical dark and mysterious atmosphere which is hard to describe.
I’m not a fan of these kind of harsh black metal vocals and this bothers me a lot in the next tracks. When the voice is a little bit cleaner it sounds quite nice, and the violin and Bodhrán give it all a very authentic taste. This are the pieces I love in this album, but unlucky for me there’s also a lot of harsh black metal on this album which I don’t like.

So if you’re a fan a harsh black metal besides the folk elements this is something for you. If you can’t stand that, you must definitively skip this album because each song has both elements. Except for the first track Friggjar faðmbyggvir er mér falin, which is the only one which I will listen to.