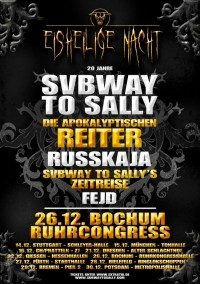 The second year in a row Subway to Sally’s Eisheilige Nacht tour takes place in the Ruhrcongress in Bochum, Germany. This nice venue has plenty of space for a big event like this.
This year’s Subway to Sally’s 20th anniversary, so it’s not only time to party but there are also some special treats on this tour. The first one is the band can be heard and seen as a support act with a Subway to Sally timetravel, they go back to 1995 and play songs from that year in outfits and style of those times. The second one is a CD which can be bought only at the Eisheilige Nacht Tour. After showing your ticket you can get one CD for only 1 Euro! On this CD besides Subway to Sally, ten bands playing a StS song. You can find a review of this CD on Folk-metal.nl in a couple of days.

Fejd
The evening starts with the great Swedish band Fejd. The sound isn’t very good at first, there’s a lot of low in the sound, the bass-drums are much too heavy, but this gets better after a few songs. A bit of a shame because this band deserves a lot more playtime. Now they played less then 30 minutes, in which they even didn’t play a super-nice song as Storm. But we got some very nice other songs. And we even got a song called Sigurd’s Ring from their upcoming album. And this was a pleasant surprise, because this was a very nice one. From this song on they sounded super and it their energetic performance with this typical Swedish atmosphere was received well by the German audience. So we can’t wait to see them playing a bit longer.
Score: 7/10

Subway to Sally (Timetravel)
So, after the winterwarming-up by Fejd it was time to go back in time to 1995. The young band Subway to Sally enters the stage, all in nice clothing dating back to 1995, and the most catching thing is enormous amount of hair on Simon’s head. This is looking great. They’re playing a lot of nice songs form the old Subway to Sally days, and we can see they were fond of a lot of fire back then. As a small starting band they didn’t have the money for all kinds of fancy fireworks, so they light the stage with torches and they’re spitting fire. During this fire-spitting it goes quite wrong with Simon, because suddenly his whole beard catches fire. Fortunately he’s bald again and didn’t wear his wig any-more, so he’s back on stage after two minutes and can play the rest of the show.
It’s very nice to hear Subway to Sally in this setting. Although they’re playing a few songs we can still hear every now and then in their set-list, this sounds all very authentic. A very nice job!
Score: 9/10

Russkaja
And the party goes on with the party band Russkaja. Bringing Russian ska and party music, causing the whole venue to circle pit fleeing for their Psycho Tractor of course. They’re interacting with the audience all the time creating this nice Kollectiv, and the audience is enjoying this very much. Russkaja stays a perfect band to cheer up a nice festival, they proved this time and time again in the future and they did just so this evening.

Die Apokalyptischen Reiter
I find it always difficult to write something about this band. Their set-list had again a lot of nice songs this evening. And they did a nice job on this, after a completely messed up guitar-solo in the first song, everything sounded very good. And it all looks very nice, they have obviously a good sense of making a nice show. If it weren’t for Dr. Pest, this makes absolutely no sense to me and I still think it’s out of place with the rest of the band. There’s very little left of the folk-influences in their music which I think is also a pity. But there were a lot of DAR fans in the venue, so obviously it appeals to a lot op people.
Score: 7/10

Subway to Sally
What a treat to see this nice band twice on an evening. This time the a ‘normal’ show, but what’s normal with this band. They entered the stage with an excerpt form ‘Eisblumen’ in a nice cold light with a little snow coming down, very nice touch. This turned into the next song referring to Summerbreeze and Eric floated on the audience for a while. The budget for the the fire-works seemed to have no limit and the apocalypse seemed to be very near. There were flames everywhere during the show.
The intention of this year’s show was to only play hits and so they did. At a very high rate, we got one after another. All they’re great songs were given to us. And it’s a beautiful thing to see a couple of thousand hands raised in the air for these heroes. Almost everyone was singing, shouting, clapping and of course running with ‘Besser du Rennst’.
They ended with a delegation from all bands on stage playing along. But of course when they left the stage, people kept singing: Blut, blut…
So, they came back for two more songs ending of course with ‘Julia und die Rauber’.
And then it was quiet, but when we got to our car, we just had to put the Eisheilige Nacht CD in the CD-player and we could even enjoy our journey back home.
Score: 9,5/10