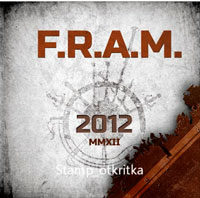 We’ve done a lot of reviews and have seen a lot of curious stuff, we done a review on a not released album before. But this is again an unofficial album, and still waiting to be released. But the band calls this their album of 2012. So, let’s give it a go.
This ‘EP’ starts with the track Zatmarennya and Koroleva, which are both very nice folk-rocksong by this Ukraine band. They’re both quite solid and have the band uses nice ethnic instruments. You get the feel of the Ukraine in nice catchy songs.
The third track is a cover of the famous song Ride On, this is still a very beautiful folk-song and the version of F.R.A.M. (in Cruachan style) is also a very nice one.
The following track Korabli is not very interesting, it has a boring ‘disco-beat’ and I had to keep myself from skipping through the nest track, each time I listened to it.
Ohne Dich is a nice cover of an Rammstein song, the bagpipes give this song a very nice touch and this is an side of F.R.A.M. Which is very nice. They can give songs a nice new coating by adding bagpipes to it.
The last track is not bad at all, but it’s not as solid as the first two songs, which are far better tracks.

I think F.R.A.M. Has an nice EP with MMXII, it’s a pity it isn’t released (yet). The first two tracks are very nice songs and the covers of Ohne Dich and Ride On are also very nice. The status of this EP is rather doubtful and I wonder if it will ever be released.