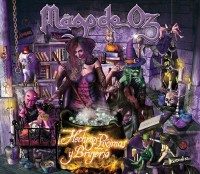 Mägo de Oz, who has never heard of them? This Spanish folk-metalband exists since 1988 and were one of the first bands which mixed influences from metal with those typical folk sounds. However, this band never succeeded to become well-known outside the underground-scene.
Maybe the reason for that is that Mägo de Oz always did their own thing throughout the years. The sound of the band is typical, mainly through the combination of Spanish vocals with typical Celtic melodies. Throw this over a strong foundation of heavy metal / power metal and you get the sound of Mägo de Oz. Elvenking has a somewhat similar sound, though Mägo de Oz has a great load of Spanish temper.
That the band can rock becomes clear with songs like ‘H2Oz’ and ‘Xanandra’. But there are also some emotional songs like ‘Quiero Morirme en Ti’ and the instrumental ‘Desde Mi Chielo’. Enough variation, but it stays a whole due to the characteristic Spanish vocals. These are mostly male and sung clean, but sometimes they’re taken over by high female vocals.
‘Hechizos, Póchimas y Brujería’ has become a long album, with its almost 75 minute duration. However, it doesn’t feel like that long. Time flies when listening to this record, since it’s really diverse. So, do you love folk-metal like Elvenking, where clean vocals play a lead role? Definitely take the time to listen to this!