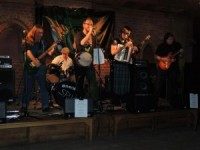 Weather alarm and heavy snowfall, BULLSHIT! Okay, it was snowing that Sunday, but the roads were clean enough to go.
This means it’s time for our yearly weekend of being the dressed up freak in outdoor museum Archeon.
Around ten the gates opened, and with just over 2 hours of travelling time I’d say, Start your engines!

The Royal Spuds
And well, using this last term. The first thing after entering the area is running to the monastery where the first band of the day was going to play, The Royal Spuds. The folkpunkband from Leiden (NL) of which I rated their EP really high last week.
The stage is just big enough for these six musicians. They simply tell us that it was just a bit early but still “good-morning, and start your engines, or something like that…”
With a good mood we start the show. The few people around obviously hadn’t really woke up yet. They were just sitting on the couches, slowly some more people entered but they didn’t really walk up to the stage. Although on my left side, there where some people dancing. Never the less, the sound was really good and their play was very good as well. The songs I knew from their EP like “come out ye black and tans” or Finnegans Wake” where interspersed with songs like Chip from The Real McKenzies, Victor and his Demons from Fiddlers Green, Spinning Jenny from Skyclad and a song most of the people who read this English version won’t know. This song is from one of the famous Dutch singers, Guus Meeuwis and the song is called “verliefd zijn is veel leuker” or “being in love is much more fun”. The Spuds were clearly able to forge this song and craft it again so it didn’t even sound like the original, but it sounded like Spuds to the bone, amazing job!
I’d say this was a really good gig, though it was much too early in the morning for this kind of music. This is probably the reason why the reaction from the crowd was quite tame. I think these guys should stand of a few hundred enthusiastic people, that’d fit them much better!
Score: 8/10

The rest of the day exists of walking on the fair, looking what there’s for sale in all stalls. Mead, LARP-weapons, armor, clothes, instruments, jewellery, food and many other trinkets were for sale in an crowded setting of dressed up people and live music. Many musicians were playing, some on stages, some were just walking through the park. After walking around for a while, we decided to sit by a camp-fire. Than we figured out we wanted to go to the storytellers shag to listen to one of the best storytellers in Holland, Abe de Verteller. This time with another legend from the 15th century, told in the warmth of a fire.

The grand final of the day was the spectacular fire act! One of the better fire dances I have seen this year, performed by three young men.