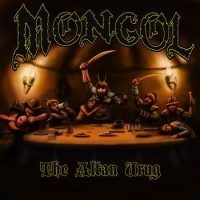 Mongol is a Canadian Folk/Death Metal band. They want to honour the ancient Mongolian empire.’The Altan Urug’ is their second album. Their début was an EP and this is their first full length.
This album starts with the intro Das Ziel. A nice intro spoken in German, well done. Kriegersmarsch is a nice deathmetalsong, it’s not something very original but it’s a decent song.
The third one Pipe Dragon isn’t very spectacular either. You get to wonder what Mongols has to offer us, what we don’t already have. It’s decent death metal, with a little folk. But Valkyrie Cry is a bit nicer. A nice catchy song.
With Eekum Bokum they show their weird side. With a kind of Trollish rhythm and funny keys they put down a nice song. After this weird intro it picks up a lot of speed and becomes a nice weird song.
Changeling is another nice song but also nothing special. Tengri’s Pass is an intermezzo, which has a crazy sound and played in a loop, the song goes on forever.
But in the very last songs they show they can do something else. There’s more emphasise on the folk-influences in this track, and this is nice. If it’s very Mongolian I can’t tell, but this is a nice one.

Mongol has done a fine job with ‘The Altan Urug’, but it’s not very unique. There are a number of nice songs on this album, but when you call yourselves Mongol you may have some more Mongolian influences in your music. Nice album which makes me curious what this Mongols will create in the future. They surely have potential when they explore this sound further to make something special.