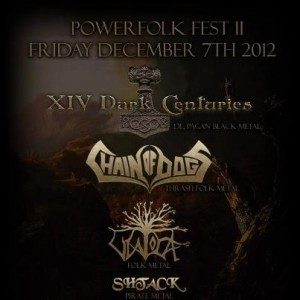 Snow, a concert in a faraway town Sittard and a journey by train of almost 2 hours. This could only be a sign for a misery. But this turned out to be OK, we were on time for the first band, Shtack.

Shtack
Shtack makes piratemetal according to themselves. Don’t think of Alestorm immediately, because these young guys are rougher, the grunts by the guitarist and bassist are a good example. The podium-presentation was nice to watch, and the band was very enthusiastic. In a musical sense, most things were OK, and despite of the fact the guitar could almost not be heard at first, this was better later on. Despite of this there were some moment when I thought: ‘What am I looking at’. This reached it’s heights when Shtack played a song about the making of peanut sauce. All in all a nice opener of this evening!
Score: 7/10

Chain of Dogs
After Shtack Viatora should have played, but they cancelled unfortunately. So, it was Chain of Dogs’ turn. Despite the fact the sound wasn’t very good again at first, you immediately noticed a professional band at work. An excellent presentation, excellent musicians and good interaction with the audience. The only problem was the audience reacted slightly disinterested. This didn’t keep the band from playing stout-hearted. There were even some guest-musicians called to the stage Samana of Viatora and Rafke took care of the backing-vocals, while Thimo of Shtack played the accordion. A nice extra! Then it was time for this band to quit, but not before they played their genius cover of ‘You spin my head right round’.
Score: 8/10

XIV Dark Centuries
To bad, but I haven’t seen enough of this band to give a judgement. In contrast to the other bands, the sound was right from the start. And their presentation was very good. Unfortunately the railway timetables are not very suited for these concerts. In combination with the fact some bands needed more time, caused I had to leave after the third song of these gentlemen.