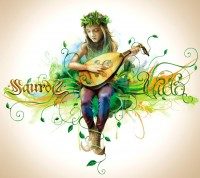 Saurom is a well known band in Spain and Spanish speaking countries. While over here in the Netherlands only a few people know this band. And why, I don’t know. It’s typically Spanish folk-metal that’s for sure, but it’s very nice. It’s not for the screaming harsh metalfans, it’s much more melodic. But the album is full of nice songs for the people who love the combination of folk with rock and heavy metal.
From the start with ‘Cambia El Mundo’ it’s clear folk is a big element in the music of Saurom. Especially the whistles can held responsible for this influence. Nice happy whistle-tunes are a huge part of the Saurom-sound. The band combines this with solid rock and metal.
Besides nice rocksong there also some more ballad-like songs like El Hada & La Luna and La Poetisa, which is a bit to sweet in combination with this Spanish lyrics for me, but when you like this kind of songs to spice up an album, they’re very nice done.
I like song like Íntimos Recuerdos and Ángeles more, this kind of songs have a nice tempo are nice solid and catchy.
But in my opinion Saurom saved two of the best songs for the end. The beautiful long track Se Acerca El Invierno is a true masterpiece, including many Saurom-elements from the lovely ballad-like sounds to the more solid work, but there’s also a beautiful choir in it.
And I’m a sucker for beautiful acoustic guitar-pieces, so they’ve caught me with El Cristal totally. This is a very nice ballad, simple and very tasty.

Typical Spanish Folk-metal, but this doesn’t mean it isn’t nice, on the contrary, it’s a very nice album.