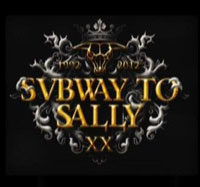 Subway to Sally exists 20 years this year. Of course this is a very good reason for a nice party and for some special treats. One of specialities of this year is a CD. A very special one which is only meant for the real fans. That’s why it’s only available for the visitors of the ‘Eisheilige Nacht Tour 2012’. When you show you ticket at the merchandise, you get this nice item for only 1 euro!
On this album we find 12 Subway to Sally songs, done by 11 bands. Two songs are done by the band itself, 10 tracks are recorded by other German bands. And not simply covered, but the bands have left their own trademarks in this songs.

Fiddler’s Green kicks of with ‘Julia und die Räuber’, nicely done. The StS version is more solid, Fiddler’s Green has given this song their usual Irish touch, the bagpipes are replaced by fiddle giving this track this nice FG sound.
Unzucht has this heavy synthesizer sound which sounds perfect with a song as ‘Veitstanz’. It’s fits nicely with this song.
Mono Inc. has made their version of ‘The Surge’ (Auf Kiel), this time the song is also done in English. The synth-choir is also a nice addition.
Letzte Instanz was, just like Fiddler’s Green also at the Eisheilige Nacht Tour of 2011. The band had this characteristic cello and violin sound, this suites a song like ‘Schneekönigin’ perfectly. The cello is a very nice touch in this song.
Next year’s participant of Subway to Sally’s Eisheilige Nacht Tour is Lord of the Lost, they covered ‘Eisblumen’ for this album. This is the track which bothered me the most. The low voice is very different from the normal Subway to Sally version, but when you listen to it more, you learn to appreciate this. The fragile character of the original is somewhat gone, but this is meant that way, making place for a whole new experience of this song.
Where Subway to Sally is quite serious, Feuerschwanz is the opposite, so what would a Feuerschwanz edition of ‘Kleid aus Rosen’ sound like? Great, the schalmei is in good hands with this German knights, the typical voices of this band are used to perfection in this song, and the choirs are very beautiful.
Alea of Saltatio Mortis can be recognised at once in the seventh track of this album. ‘Traum vom Tod II’ is a nice Saltatio Mortis of this song.
Tanzwut has put his mark on ‘Mephisto’, and has done a great job with this one. Again we find a Subway to Sally song with the trademark of another band.
‘Knochenschiff’ is done by Schandmaul, and this great musicians have adapted this song so well, it has almost become a Schandmaul song. It almost confused me, who’s song is this?
The typical sound of Coppelius gives ‘Maria’ a whole new dimension. The very fragile original sound has made place for a more renaissance like sound. Very nice version done by Coppelius.
Krähenfraß and Schlagt die Glocken are done by the masters themselves. A live version of the first one and the last one is a track of their latest album.

You have to adept to this album for a while, but when you get used to it it’s really nice. You can feel there are people with great skills at work here. All band have gotten a song which suites them. None of the bands has simply covered their song, but they have all made it a song of their own. Without messing up the whole song they all made a beautiful new version of it. This album is an absolutely ‘must have’ for every Subway to Sally fan. But even if you’re not it’s a nice CD and a nice way to listen to the music of the masterminds of Subway to Sally and get used to the sounds of other bands.
A very nice album!