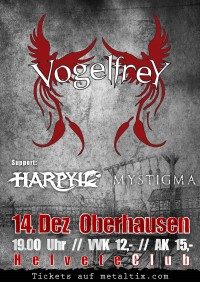 Vogelfrey on tour with their ’12 Schritte zum Steck’ tour, just across the border in Oberhausen, who can effort to miss this? Helvete Metal Club is a perfect location for this kind of concerts. Enough parking space in the neighbourhood of this nice venue.

Mystigma
Mystigma had to kick of this evening. Description in one sentence: When a band is as good as their weakest link, this good band was very bad.
But I realize this needs an explanation. The band is quite nice. The compositions are not bad at all and you can call this gothic rock or something else, I would prefer the term New Wave, because it’s no different from this music from the 70’s and 80’s. More the eighties-like because ot the rather polished sound. But the vocals are that bad, it ruins it all. It’s hard not to move at their music, but it’s sometimes hard to stay and not to move towards the door.

Harpyie
Now we’re talking, a Medieval band, I haven’t seen live yet. I have to say, I like their CD, they can’t compete with a band like Vogelfrey, but it’s nice and decent Medieval rock. And I’m a sucker for bagpipes and they have a lot of that. This is immediately the thing bothered me last night. It took some time for me to figure it out. It wasn’t bad, but it could be better. Was it the violin which was out of tune with the other instruments? Yes, this was a bit annoying sometimes, but there was something else. We got almost the entire CD ‘Blindflug’ and then there was ‘Rosenrot’, a Rammstein cover. And then it hit me, this could be a very nice Harpyie version of this song, with this nice bagpipes. At the end of this song they could be heard, but their whole concert the volume of the bagpipes was way to low, which deprives their music of an essential element. Too bad, this is a very sympathetic band, with a lot of nice songs. But what remained was a nice gig of a band I surely like to see again.
Score: 7/10

Always nice to see a band I’ve never seen before like Harpyie, knowing you won’t be travelling in vain, because there’s also a band which will guarantee a nice evening.
They started with Düsterplicht, of course a perfect song to start with. And from there they take us on a journey through their albums. It’s amazing to see how this band as grown in a relatively short time. The podium-presentation is very good. With no help of fireworks of big light-shows they lay down a very decent show with very nice interaction with their audience. And besides the fact they look very professional on stage they prove their great musicians as well. The violin and cello-parts fit in perfectly and despite the fact it’s very hot in the venue, the temperature on stage is even higher, they do a great job. We get to enjoy a 90 minutes show, including almost all the songs of both albums. And of course they have a few encores for us in store, but the venue doesn’t have the opportunity to leave the stage in an ease way. So, the band is clear about this, they have a few songs for us, it we’re loud enough. This is no problem, because the audience is very enthusiastic. And Yannick and his outlaws play another three nice songs for us. And after a nice circling polonaise which implodes at the end of the song to a nice pit, we all can go home, or elsewhere, but all very satified.
Score: 9/10

So Helvete, thank you for promoting this kind of bands in this beautiful venue.