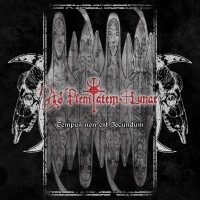 In the last days of 2012, something curious happened in Italy. No not the Mayas predicting the end of the world. But time was turned back to 1511, but not as we know it from the books. No, this time the power of the fights and knights can also be experienced in the music as well. No, minstrels on the corner of the street, but a full rock band playing fierce Medieval rock and metal.
Ad Plenitatem Lunae released their debut-album. And it has to say, this is original. It sounds most like the Medieval bands like we know them from Germany and if you insist on comparing them with one of them, In Extremo is probably the best on to compare them with. But on the other hand, this will do no right to the originality of these Italian Warriors, they’re different and most of the time much louder.

This album starts with an fine Italian spoken intro, which lays down a good Medieval atmosphere. And then they hit off with the first song Sante Agnês, a fine catchy song with beautiful bagpipes, this one is probably the most In Extremo-like song of the album.
A nice harp gives way to Tempus non est Iocundum, which has a fine metalgrowl, very nice, catchy guitars, and again beautiful pounding bagpipes. Wow, what does this band have in store for us?
Turcs, is starting with this nice bass-guitar, the keys have a nice Medieval sound in this one. Again a very nice one. With variations from rather quiet and easy Medieval to Metal in one song.

After this an Intermezzo, nice bagpipes in a Medieval style.
Cogoçârs is again a nice track, I’m not very fond of the spherical keys in this one, but despite this it’s a nice track.
Back to 1511, 27 Di Fevrâr, this is awesome, Medieval at it’s loudest! Followed by L’ustîr, regarding the rest of the album a rather quite one, but not is what it seems, because this one also ends with low metalgrowls.
After this again an intermezzo, this time a Latin Church choir, nice one. Followed by Canis Domini a very strange track with beautiful guitars, this songs has a very strange tension, but it end quite bombastic and loud.
And Agane is another song which starts of nice and easy, but you can bang your head at the end of this one, curious to do this all in one song, but oh, so nice.
In La Strie we can also hear Davide Cicalese of Furor Gallico, another fine Italian band. The choir starts in a nice clean way, the beautiful bagpipes make your shine shiver. This is followed by a clean male choir and guitars, but then it gets loose. Screams, bagpipes, the works….
And the album ends with a weird outro.

Medieval rock at it’s best and this time not in German but in Italian, which makes it quite different. Ad Plenitatem Lunae has also a bit more metal then other Medieval bands. Tempus Non Est Iocundum is a very very nice album and a pleasure to listen to. Takes you back to 1511, but with the metalpower of modern times!