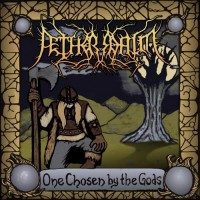 After an EP in 2011 and a single last year Æther Realm is releasing an full length this time with their Melodic Death and Folk-metal.
Journey of Discovery is an over two minutes long nice intro. It builds up the tension and when you aren’t familiar with this band, you don’t know what to expect.
But when Hourglass starts this is clear. Fierce but melodic metal, some Wintersun-like stuff can be heard in this song.
The third one is the track Æther Realm, and this is again an up-tempo song, with harsh vocals. The vocals aren’t the most brilliant ones you’ve ever heard, but they fit nicely in the music. The guitar is playing a larger role in the music of this band.
Swampwitch is their single from last year and a very nice one. Nice catchy, with nice guitar-riffs and a simple chorus which can easily be sung along.
But the title-song One Chosen by the Gods is one the most brilliant track of this album. This one is nice catchy and has a lot of nice changes, reminding a lot of a band like Wintersun.
And the album goes on at this high speed.

Despite the fact Æther Realm never reaches the height of Wintersun, they have surely made a nice album with One Chosen by the Gods. A nice album filled with nice catchy tracks which surely will appeal to the fans of Melodic Death Metal. There are no brilliant songs except for the title-track, but there are no bad songs on this album either. The quality is very decent and this makes it a pleasure to listen to.