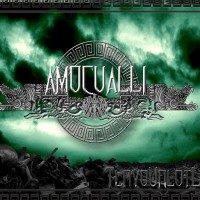 Amocualli has know a lot of up and downs. Due to circumstances the band was on hold for quite a while. They released a demo in 2005, but it took almost eight years before they released this debut-album. The mix of metal with traditional Tuxpan Jalisco music is a very nice idea. And the use of a lot of traditional instruments is a very nice choice. With this these items they’ve created a very nice sound of their own.
This pre-hispanic pagan metal takes us back to the times of ancient Mexico with fierce metal and a lot of ethnic instruments.
But in my opinion this album has been made too early. The songs are nice and I can understand they want to release them on CD at some point. But this is not thought over very well. Everything is not nicely synchronized and the keys are sometimes simply too simple. But strangely I can keep listening to their music, because it has also a lot of nice ideas. If they only were worked out better…
The songs are nice and the ethnic influences sound good, they make up a little for the poor production. For instance the keys are too loud sometimes and the timing is not right.

I surely hope they continue working on this idea and when it’s fully developed they will search for someone with some experience on producing metal with a lot of instruments, because these songs can sound much nicer when this is properly done.
This music has surely potential.