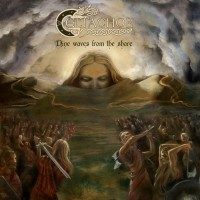 After two demo’s Celtachor released their first real album Nine Waves From the Shore. Time to gather at the beach to look what’s there.
We have to seek for a good hide-out at once. Celtachor started ‘The Landing: Amergin’s Conquest’, and this is a very catchy start of an album. The raw vocals in Waylander style are screaming their way to my spine and this isn’t the only Waylander-element. The whistles are in the same style. But the music is more epic, more catchy. I want to know more about this invasion, is this friend or foe, I hope they’re friends because I definitely want to hang out with these hero’s.
About ten minutes after their landing they are going into ‘The Battle of Tailtin’, and this is a fierce up-tempo song in which all will be slaughtered. This song has a beautiful intermezzo in the middle of the chaotic fight.
After this great fight we find ourselves witnessing ‘The Kingship of Bodb Dearg’, we get dragged along in this melodic sound. The piece with percussion and guitar is a real masterpiece.
‘Sorrow Of The Dagda’ goes on in this typical Irish style, but has a superb ending with flute and guitars which flows into ‘Tar éis an Sidhe’. And when all has burst out, there remains this quite acoustic guitar leaving us with sorrow and sadness, a very nice acoustic piece.
When ‘Conn of The Hundred Battles’ speaks you can only obey, you can feel his anger.
This leaves us with ‘Anann : Ermne’s Daughter’ another catchy song, nicely composed like the rest with a lot of changes which keeps it all very exciting.

A very nice début by Celtachor, this is how you settle your name. Maybe it’s not everywhere the most unique sound. Where the masterminds of Waylander once created a sound. Celtachor is taking this one step further with beautiful compositions. Excellent début!
I’m heading back to the shore, to see if there’s more of this epic stuff to come.