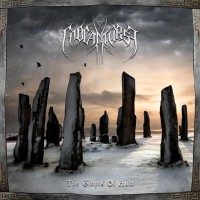 After a small guitar-intro The Piper O’ Dundee, Cnoc An Tursa expresses what we can expect from their début-album ‘Giants of Auld’. Epic songs, with harsh black metal vocals and spherical keys. A nice blend of folk, pagan and black metal. And it’s almost stunning how nice this album is produced, we don’t hear this very often on a début-album.
Personally I’m not a fan of this kind of vocals, the metal-screams are nice, mixed with somewhat more clean vocals would bring even more tension in their songs. The lyrics have Scottish themes and this makes them rather unique.
The Lion Of Scotland has all the above and has like most of the songs a very high pace. The nice guitar in this song sounds familiar, but gives this song a very catchy feel.
Bannockburn has again this high speed, and has a lot of black metal. Where Hail Land Of My Fathers has a bit more folky feel and the keys are dominating this song.
When I get a bit bored by the vocals when we’ve come to Ettrick Forest In November, I keep listening, because in this song Cnoc An Tursa shows they’re very capable of writing nice compositions. The changes in this songs are very nice.
The Spellbound Knight has again such a nice variety, the spells fill the air accompanied by keys and a moment later there are fierce guitars.
The next song In Shadowland is very up-tempo and straight forward again. But Winter – A Dirge has slows down the speed sometimes and has a lot more variation. Followed by the catchy track Culloden Moor where the guitars and keys fight each other for domination.
As a last track there’s Blаr na h-Eaglaise Brice. You can feel the spirit of the Scottish highlands, in this song. It’s very unlike the rest, very easy, very relaxed and more like bands like Clannad and Enya.

Cnoc An Tursa is like a lot of Folk and Pagan bands from Great Britain very orientated on Black Metal. And they made a great debut-album with The Giants of Auld. The production is superb and the songs are very nice. It’s the vocals which bother me after a couple of songs. They can improve on this point by bringing more variation in the vocals. But this is the only slightly negative point of this album. The nice riffs, the spherical keys and the Scottish lyrical themes form the proud Scottish base for this great album.