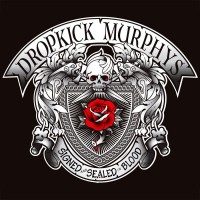 It’s always exciting when the Dropkick Murphys release a new album. It’s not only one of the big names in the folk-punk scene. But they’re crossing the border between punk and folk many times. So despite the fact their music is very pleasant to listen to, it’s sometimes more folk and on another album more punk.
Signed and Sealed in Blood is a nice mix of Folk and Punk. Where a song a ‘The Boys are Back’ is somewhat more punky, ‘The Prisoner’s Song’ and ‘Rose Tattoo’ have plenty of folk. With ‘Burn’ they have a nice shout-along song, with nice banjo pieces. And a song as ‘Jimmy Collins’ Wake’, has this nice Irish pub feel.
And there’s this great Christmas song ‘The Season’s Upon Us’, a song with a great Christmas feel, but with a nice punk-taste as well.
‘The Battle Rages On’ and ‘My Hero’ have this nice punk-feel again. But also in this somewhat more punky songs the folk isn’t forgotten at all.
The tenth track of this album ‘Out On The Town’ leans more towards rock and is the least nice song in my opinion. Fortunately we get some nice folk sounds again with ‘Out Of Our Heads’, a song with ‘hit-potency’, a nice one for a shout-along and a nice mess at their next concerts.
And I can imagine the guys end their gig with ‘End Of The Night’ and while they leave the stage the music carries on with this nice sing-a-long.

It’s easily to sum up the qualities of this album. It has plenty of punk, plenty of folk, nice shout-a-long songs, it has party, it has energy. Simply said for the folk-fan this is one of Dropkick Murphys best albums ever!