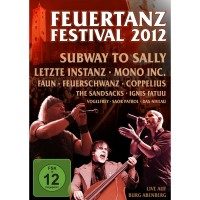 When bands make a DVD they mostly film a few concerts and pick out the nicest recordings to create a DVD. The Feuertanz Festival 2012 DVD is not such a DVD but the recording of the Feuertanz Festival 2012. Of all appearing bands are a few songs on this DVD, as a whole it gives a good impression of this Medieval festival. But what if you weren’t there….?
It all starts with Das Niveau, performing 3 ‘songs’ for us. The are very popular, but it’s surely not my cup of tea. It gives a nice impression of what they do: a comic act performing on a lot of festivals.
It all get’s better with The Sandsacks, there’s space for 4 songs of these Irish folkers on this DVD and that’s nice. Using bothran, whistles, bagpipes and stuff to create this fine Irish folk-sound. Very good performance.
Then it’s up to Soar Patrol to bring a song in honour to all warriors of the past, present and future. A good performance by this memorable five-piece. Guitar is a little bit loud in the mix. But this is a band you should see live. The powerful rhythm section is more thriving live then it is on record. Of course they play ‘Duncarron’, a wonderful project in Scotland, where a Medieval village is build.
After this it’s time for Yannick and his comrades of Vogelfrey. The singer of this sympathetic young band is always capable of creating a nice atmosphere and he’s doing this again this time. Despite of a some little failures they put down a good show and they show how varied their songs are without losing they typical Vogelfrey sound.
After this it’s time for the minstrels of Ignis Fatuu which are playing more straight forward Medieval rock. Again we can hear nice instruments like violin, whistle and bagpipes. They also manage to create a very good atmosphere which is obvious when the audience keeps singing at the end of Spiel des Lebens when the band has left the stage. They end with Nordwind, with a slightly too loud whistle, but they have made a pretty good impression with this show.
In the past I was impressed with the performance of Coppelius during a festival, but they’re not a band I listen to at home. This made me curious, how would this be on a DVD? And I’m pretty sure the Coppelius fans will like this, but I like to watch them too. They have a very nice podium presentation, weird but very catching. I’s a nice act, and they’re very nice to look at. I’m looking forward to see them again during a festival. This is a band you should have seen at least once.
Then it’s time for one of the most famous folk bands in their genre: Faun. A very good performance by this band. Everything sounds very nice, and they build a nice strange atmosphere with their oriental sounding Pearl. There’s only one song on this DVD, but this is lasting for over seven and a half minute of fun for the Faun fans.
Then we have the opposite, from the fine balanced compositions of Faun we go to the ‘not too complicated’ music of Feuerschwanz. But this is not what the music of these knights is about, humour is the essence of their music. You have to understand the German language for this one, but when you do they’re hilarious. They’re preference for dirty jokes is obvious again, because after they have have expressed their love for bagpipes in the first song, they have to cope with some body-parts which won’t hang down every now and then. And in the last song they have some alternative wishes in case you meet a pretty fairy who offers you to make a wish…. and ‘Wish is Wish’!
Moving into the twilight of this wonderful day Mono Inc. appears on stage with a lot more serious act. And I have to say hats off for this female drummer who manages to sing her beautiful fragile background vocals while drumming. This is what makes the sound of Mono Inc. nice in my opinion.
It has became dark when Letzte Instanz appears on stage. Their typical sound marks a somewhat more quite song like Wann as well as a faster and merrier song Rapunzel. And they sound nice, with their typical cello and violin pieces. A very nice show ending with Wir Sind Allein.
But they aren’t, Subway to Sally is also there and they are the final band on this DVD, with four songs. We get to see Mephisto and after this Schwarzes Meer, which is fully understood by the audience because we can see crowsurfing people on this black lake immediately. The band shows it’s fine craftsmanship with a nice song like Wo Rosen Blüh’n with beautiful choirs and nice changes in this fine composition. The last song is Wenn Engel Hassen, a perfect ending for a very nice DVD.
For the German speaking listeners there are also a lot of small interviews on this DVD, and some nice impressions of the festival.

Feuertanz Festival DVD is a ‘must have’ for everyone who was present at this festival, but it is for all other fans of Medieval rock. A very nice DVD to watch with friends drinking a nice pint of beer or mead. A nice warming up for the festival season to come or a nice one to get to know this kind of folk-music a bit better.
But definitely something you want to have in your collection if you like to watch a music DVD every now and then.