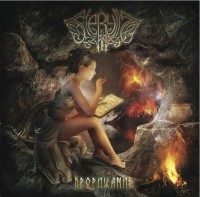 Fferyllt released a début-album in 2009, with a lot of nice songs on it. This album included a cover of Ensiferum and one of Eluveitie. After this we have to wait a long time for a second album.
But the Russian formation has released a second album called ‘Proritsanie’.
I liked the first album of this band so I was very curious about this second one. And this was a great surprise to me. Fferyllt describes their music themselves as Sympho Folk Metal. And this is a good description I think. The music has evolved a lot in the symphonic direction. But the folk-elements aren’t forgotten in their music.
They have developed quite a style of their own with this music. It can be noticed one of the founders plays the keys in Fferyllt, because they have a large part in the sound. They form the main part of the symphonic sound, they’re backed up with great harsh male grunts and clear female vocals, the last one often in a ethnic style. The solid guitars and drums form the metal part of the music.
Although I can’t understand the lyrics the album the story seems to be a whole. And regarding it as a concept it’s a joy to listen to. But also the individual songs are very nice. A song like Fenrir is a beauty.

Fferyllt has made a fine album with Proritsanie, their Sympho Folk Metal has grown into a very style. The combination of symphonic music, folk and metal is put into a beautiful sound. And also the album as a whole has become a beautiful story. I predict Fferyllt has a nice future lying ahead of them.