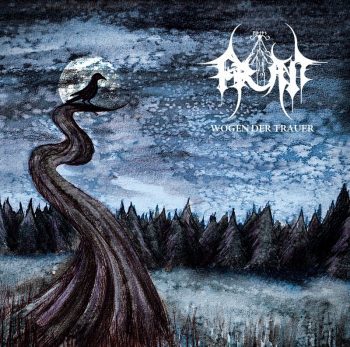 Firtan exists since 2010 but until a couple of weeks ago, when I noticed them on facebook, I had actually never heard of them. That’s not that strange, since they have never released an album. In 2010 they recorded a demo but they never brought it into the world. After some line-up changes they now release their first album: Wogen der Trauer.
The CD starts with a quiet intro which easily mixes into the mainpart of the song, and I am immediately enthusiastic. The guitar-riffs The guitar riffs are not that special but they are played tight and sound well. The vocals are good and varied, the lyrics appear unfortunately difficult to find and there is no information sheet included which would explain the ideas behind this album further.
Orchestral elements and other keyboard work is nicely present and luckily not dominating. After all, they already get enough attention in the intros. The smooth transitions are worth mentioning. No jerkiness, nothing but wonderful flowing music even in the moments of acceleration.
Some songs, like Ewig Vergangen, contain an instrumental break, I’m glad the drummer maintains pace so the music does not collapse.
With Vidar Haustshlag we’re reaching the end of this really good album and also this song is well done. There is a good combination of guitars and keys where the vocals are a good complement instead of dominating.
There are only 6 songs of between 4 and 6 minutes, I wish it was more!
All together this is an excellent album with variation and good mixing. The only point of criticism is that the guitar at some points can be more outstanding.
This band deserves a record label and a nomination for the list best debut album in 2013.