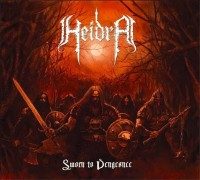 Some nice big surprises of 2012 seem to come from Denmark. Earlier in 2012 we got the beautiful debut-album of Huldre. This time we get the EP Sworn to Vengeance by the Danish band Heidra.

This EP contains only three songs and you can say only one thing about that: it’s way to short, it should be a full CD, no a double CD. Whatever, I want more.
The album starts majestic with Kinsmen, which turns out to be a very nicely composed songs with nice changes from slow to up-tempo and from nice quite pieces to fierce and harsh ones.
Their music is a blend of Black, Folk and Viking-metal. And this is a nice one. It has nice guitars, fierce drums, nice bass with sometimes very nice outstanding lines, decent keys and nice vocals. With this they create a sound of the harsh lands of the Vikings.
The title-track Sworn to Vengeance starts with keys and for a moment you think they go on the Trollish road and there are indeed some pieces which remind of the ‘Trollbands’ but the track as a whole has more. And oh, I love this nice bass at about 4:30, not a complicated line, but it has this nice deep sound.
Where Darkness Dwells starts with this beautiful acoustic guitar. But it all gets heavier along the way. It’s in this song where the vocals stand out the most. The nice metal screams and the deep dark cleaner vocals are very good.

And they there is this nice cover. The cover-art is really beautiful, it captures the music very well. The dark character, grim but not blurry combined with these fierce warriors, it says it all.

Heidra has made it’s point with this début. Hopefully they find a well deserved label soon, so they can focus on recording a full album. This beautiful EP Sworn to Vengeance only gets us hungry we want more of this nice stuff. All visitors of Folk-metal.nl who are into the more fierce and harsh sound should give this album a try. Most of you would like this I’m sure.
This is an amazingly good album by these Danish metallers of Heidra, causing Denmark to become a prime supplier of Folk- and Viking-metal bands.