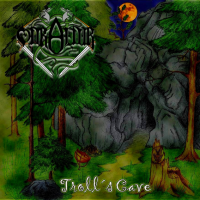 Odraedir recorded a demo in 2011, and now they think they’re ready to release their first ‘real’ EP. This EP Troll’s Cave consists of three tracks.
Where their demo was rather harsh and grim, their music has opened up at this album. There are still some fierce pagan metal pieces on this one, but there are other influences as well. When you listen to a song as Troll’s Cave almost all states of mind of these trolls roll out of their cave. Sometimes happy, but also angry, violent or sad at some points.
And the Rise of Cernunnos is another nice composition with a lot of changes. I’m not very fond of the keyboardparts all the time, but all together it’s a very nice track.
Campfire is a rather happy song, but this is also something they can handle, not too jolly, but a nice shout-a-long campfire song. The Campfire sound at the end are less nice, sounds more like a good old vinyl record which has been worn out a bit.

Odraedir has improved a lot in the past years, their songs are more mature, thought through and varied then in their first years. Don’t expect too much troll in their music, the album-title can easily mislead you. This is pagan/folk-metal and worthy listening too.