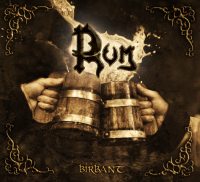 Poland has quite a number of nice bands nowadays. Rum is a new brand. They released a debut-album and with a name like this, you instantly think of… Korpiklaani. I’m quite thirsty so let’s drink!
The intro is simple, but has a nice medieval feeling working towards Historya Myszolowa, a nice song. Although the music is of the merrier kind and the vocals are quite in style with the one’s in Korpiklaani, it’s a bit more serious.
And when you’re not from Poland Piwa Rumu Wódki Wina seems kind of alcoholic, and it is in English Beer,Rum, Wodka, Rum, Wine is quite an amount of alcohol. And it is of course a humppa song.
In the next song less alcohol, we only get Beer this time, but it’s of course a rather nice happy one. It reminds me of Beer Bear a bit.
Metoda starts with nice merry whistletunes, nothing new, this song is in the same style of the previous ones. And the same goes for Birbant.
Specjal has this good accordion sound and is another real barsong, which makes us quite drunk at this point.
Well with a bit of a headache we wake up and we hear the birds singing in Syn Leśnego Dziada. And this is one of the best songs in my opinion. It has a bit more then the regular humppa.
Ogień is another nice song, it suits well with the previous song. And the last song Topielec is a bit slower then the rest. At this point I get a little bored with the vocals. They’re pretty much in once style throughout the whole record.
The song has a nice outro, and with a alcohol-consumption like this, it’s no wonder the musicians have face some difficulties to play right. They get rather sleepy… and doze off.

So, don’t expect anything special of Birtant by Rum, the only special thing is the song Specjal itself. But it’s a very decent album. And regarding this is a debut-album, it’s very nicely done. The recordings are nice, the music is nice. The only thing missing is something unique. The band has a sound of their own. But it’s nothing very special. The influences come clearly from bands like Korpiklaani and Beer Bear, but the songs are not as catchy as the ones from those bands. But with this said it remains a nice and decent album for the fans of this drinking humppaa metal.