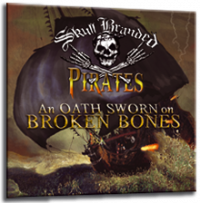 As everyone knows, the folkmetal genre has been sailed for many years by a subgenre under the Jolly Roger of Pirate Metal. Many people only know crews like Alestorm of Swashbuckle, but the English Skull Branded Pirates are sailing the venues of Great Brittan for some years as well.
After their debut with “The Legend of Salty Jim” they have woken up the pirate in me. So I’m happy to put my hat on and hang my pistol and saber on my belt for an album that takes us back to 1684.

1684 is the intro of the album in which we hear a cannonball crashing in our ship and several man are dying. I think our Folk-metal.nl ship is boared by Skull Branded Pirates, dear readers, “MAN THE CANNONS!”
The second song of this CD full of piratehits. It immediately shows us the weapon these Englishmen are using against us. Epic oldskool heavy metal forged in a captainscoat. Fast guitar riffs and catchy tunes that will turn all landlubbers into seafarers. This all is complemented by some strong vocal work. “No quarter shall be given, MAN THE CANNONS!”
In the next song some grunts are added, but not that much, so we keep the known sound of these pirates.
The Ballad of One-Tooth McGuyver is another great piece of heavy metal and with these song, the pirates grant us another singalong. As well we hear an intermezzo with some jazz influence.
Then I’d like to tell you something about the song Straight outta Kingston or, Doing it for the Booty.
Here the Cross Skull Branded Thieves show themselves from a very different side, a pirate rap. We fight, we steel, piracy for sure. We’re always doing it, doing it for the booty!
The song reminds me most of “Demagogue” by Urban Dance Squad. It could just be a new intro for a Swashbuckle gig, but that would be to little for these English. This is a great add on their repertoire and shows their versatility. And the harbor bell sounding trough is by the way a great extra!
A light breeze in the sails and a slow accordion, it’s time to swear an oath on broken swords. This is without any doubts the slowest song on the record. But perhaps is that the reason to enjoy this one even more. Bless the waves and curse the gods and swear an oath on broken swords!
Again the sing-along level of these marauders is quite high. A merry Caribbean intermezzo makes the song somewhat happier and makes me very curious about what else this album is granting me. With a soft acoustic guitar sound we end the title track of the album.
Now it’s time to prove that captain One-Ayed Wilson can trust us, the three trials!
The song brings us back to the fast heavy metal. If you’d like to know what to do to prove yourself I recommend you to listen carefully to the lyrics, you’re gonna have to buy this record anyways.
I’ll jump onto the last song of the CD. The last album, The Legend of Salty Jim gave us a drinking song called Inside the inn as final. But it seems these pirates haven’t had enough liquor so they’ve written another ode to the booze… Drink ‘till dawn!
A up-tempo piratehit to sing along with, even when you hear it for the first time, the lines are easy to get into and well fit for shouting them. A worthy final on an great pirate CD.

For me, this is a great record that everyone should make sure to add to his CDbox. So buy these disks for a few euro’s and support these men to cross the sea and raid Europe! This album is the real booty!