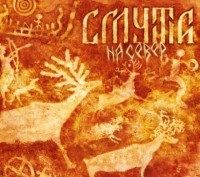 ‘Na Sever’ by Smuta is not their first album, no, this is their fourth full length already although the previous one was back in 2010.

The first track of this album is entitled ‘…’, it’s an intro in which we hear lovely dreamy vocals. But it blends nicely with the first real song ‘Moroz’, and this is beautiful. The music of Smuta has beautiful clean female vocals with a gothic/opera touch. It’s traditional, but it has more. The male vocals are low and dark, and rough and Russian, the one you flee for when you’re facing an enemy. But Smuta is not an enemy, the catchy guitars grab you at once and the band takes you along with them on a ride through ancient Russia. And when female singer Maria isn’t singing she plays this very nice flute. It’s almost a burden she can’t do both at the same time.
‘K severnoy strane’ is another nice track with somewhat more traditional vocals.
But ‘Kray’ is more grim and dark, the keys create a beautiful background for this harsh song and only the flute plays quite a merry tune.
Beautiful high guitar-tunes are the intro to ‘Zagovor-obryad’, which is a song with well done changes, nice guitars, and beautiful vocals.
The end of the next song Den’ byka is the nices part of this song, because it has a nice folky touch.
‘Siver’ is pretty catchy track, the pieces with guitar and flute are brilliant, the two vocals form a nice contrast in this song.
When the wolves are chasing in ‘Urochische volkov’ you are carried away on this ride, a very nice song, It makes me crave for more of this nice stuff.
But the track ‘Proschav’ is a not a very heavy song. This instrumental beauty forms a nice ending of the regular album. It’s a very nice track with nice flute and acoustic guitar, which let’s you feel in the midst of beautiful nature.
And then we get one bonus ‘Poslednie otbleski…’, since we have no further information I guess this is a traditional Russian folk-song. It’s not a very catchy one, but a one of the nice and easy kind.

Shame on me, but I’d never heard of Smuta until recently. And I know now this is a bad thing. Smuta has very nice songs and a great sound. The blend of Russian folk and metal with a lot of flute and male and female singing is very pleasant to listen to. Most of the songs are quite catchy.
All you fans of Slavic folk-metal should definitely listen to ‘Na Sever’ by Smuta, it’s a great album!