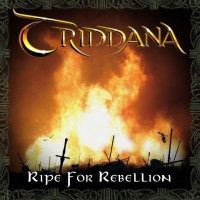 Triddana, the Scottish Powermetalband from Argentina who exists of exmembers of Skiltron finally releases their debut album. A while ago I had the honor to listen to their demo, so I was definitely Ripe for Rebellion!

For those who, as I had recommended, listened to the Demo will recognize the opener, The Beginning. Immediately I notice that these guys didn’t just put the old recordings up the new album. Triddana got some more keyboard in their sound which adds more atmosphere. I think this is a great adjustment. There also is some more space for some backingvocal, that sounds really good next to the amazing powermetalvoice from Diego. Besides this, Triddana still makes the great powermetal with bagpipes and flutes which you will enjoy over and over again.
The Wicked Wheel is he next song, a song that hasn’t been released before. It’s clear in all Triddana’s songs that this is written by former Skiltron musicians.
The new album as well has the know songs, The Dead End Verse, Spoke the Firefly and Men of Clay from their last Demo. Another amazing song is All souls Night, this is a cover that was provided online before. It’s a cover from the very know Canadian singer Loreena McKennit. For those who don’t know the original version, make sure you’d look it up, it makes you appreciate Triddana’s version even more. The song is converted so it perfectly fits these guys, but it still has the vibe that this song provided.
Another remarkable song is Born in the Dark Age, the first acoustic song I hear from Triddana. Please make some more of these guys, this is amazing!
And then after an sensitive ballad, we jump to a fast and catchy bagpipe song, one you should all know by now, Men of Clay. When I’m really honest with you all, this song is one of my personal favorite folkmetal songs, no doubt about that!
After this one we rush into Faking a War, another brilliant piece of bagpipe. A great up-tempo song which makes me want to bang my head on a live gig!
Unfortunately we are reaching the end of this 50 minutes long album with a song called Flames at Twilight.
This acoustic final song grants us a last bit of a mystical sphere and some epic bagpipes. Such a shame this is the last of the album, I still want more.

What can I say about this record besides that this is definitely an amazing debut. One that may not miss in any folkmetal fans CDbox! This album makes me want to see those guys in Europe even more.