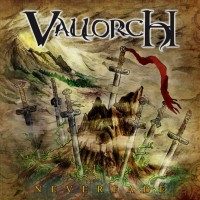 After an EP in early 2012 Vallorch released an full length at the end of 2012. The worldwide release will be in early 2013.
As said in our previous review there’s potential in this band, and this is proven by them with this full length. The clear female vocals and the male grunts form a nice contrast. And the music has a lot of elements and the changes are not always as smooth as they should be, but the band has improved a lot. There are very nice songs on this album like ‘Fialar’ and Sylvan Oath for instance. The violin in Silence Oblivion is very nice, and speaking of violin, the great advantage of Vallorch are all the authentic instruments. This gives them this nice sound. The difficulty with all these instruments is to keep the music from becoming chaotic. They have improved a lot at this point and hopefully they get professional help with this in the future which will enable them to bring this to perfection.

Vallorch has improved a lot, which is shown with this album ‘Neverfade’. There are a lot of very nice tracks on this album and they managed to deal with the somewhat chaotic sound in their first EP. They have made a nice progress, and they created an album which is surely nice to listen to.