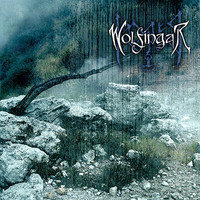 Wolfingar is one of the many new bands. What do they have to offer, more of the same. Or did they invent something new. With their first released, we give it a few spins.

This first album is called Ragnarok and it starts with the track ‘Ragnarok: The Beginning’, well you can say a lot of things about this, but it is at once a song which makes clear they’re up to make a statement. Despite the fact I hear Eluveitie, Saurom and a lot of other things, it never sounds like another band we already know. It’s a good song from the start. It’s a bit messy at some spots, but the song is very good and even the Danny Filth like screams (and I’m absolutely not a fan of Craddle of Filth) are nice sometimes.
Warpath starts after a short instrumental intro with such a huge scream, after this it becomes again a nice song. Especially the duet of the two vocalists is very beautiful. This is one for my ‘personal favourite list’.
And this is exactly what I like in Wolfingar: the vocals. The screams are nice, and despite the fact I’m not a fan of these, I have to admit they fit very well in some places. But the contrast between the vocals is very nice and the band seems to know how to use this advantage.
Dreaming the Nordic Tiger starts with acoustic guitar. Not the most beautiful intro, but the rest of the track is again nice. This song has a very nice violin in it and it has a nice refrain.
In The Rainstorm Ride they loose me, because of the screaming vocals, probably nice for screaming little girly metalheads, but I don’t like it. This is the one song, I can’t really listen to and thats a shame because it’s a good composition.
When you like violin, Black Horde is a song for you, it has plenty of violin. And again this is a nice varied song.

Wolfingar has made a fine debut with this EP. They have created a nice sound of their own and that’s a nice thing nowadays. The combination of the vocals is very good. I like it especially when they’re both singing a main part. The violin is a nice addition to their sound, which gives them a nice folky sound. Their songs aren’t very short, but this isn’t a problem, because of the nice compositions. It never gets dull, there are a lot of changes in their songs. I’m already waiting for their next album. I hope they manage to get rid of some of the messy stuff. And, but I know this is probably personal, I hope they cut down on the Danny Filth feeling. It deserves extra credit because it’s a debut and the first two songs are very nice. A very good debut, with Warpath as my personal favourite!