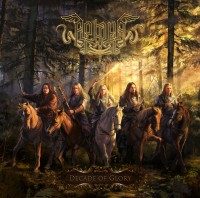 In 2012 Russian Pagan Folk-Metal band Arkona celebrated its 10th anniversary with a special concert at the P!PLE Concert Hall (Moscow). And this wasn’t a concert like we’re used to. No musical mastermind Masha had much greater plans for this concert. She invited a 9-piece choir for this, a string quartet and 2 background vocalists. Masha worked over a lot of their classics. So, you shouldn’t think of ‘Decade of Glory’ as a normal live-album, because is definitely isn’t one!
This musical journey starts with Az’ from the album ‘Slovo’ and it becomes clear at once, with the huge orchestration this album is something special.
Arkaim from the same album starts with this nice string-cacophony, followed by a beautiful choir, which gives this song a lot of depth. But when Masha steps in, it remain Arkona. The unique Arkona sound is still there, but the adds are fabulous.
And we know Masha is brilliant in a musical sense. She knows where songs can be spiced with all this extra sounds she has on a event like this. But she also know where to keep her hands of. In Goi, Rode Goi!, which was by the way already released by Arkona in two very nice different versions, there are some minor adds to the song, but they’re present but more subtle.
Although the emphasis lies on the more recent albums, a song like Marena isn’t forgotten, spiced up with a lot of strings the song sounds much more like their newer songs.
And the band continues this journey moving forwards and backwards through time showing us a large number of fabulous songs. There are 31 of this beauties on this album, which is quite a lot. But I enjoyed every one of it. The choirs and strings are an often very beautiful add to the music, like the choir in Kolo Navi for instance. And what to think of the horde of Cossack which seems to enter my room through my speakers in Slavsia, Rus’!
31 songs are too much too discuss all. But I can assure you there are 26 beautiful tracks on this album. The nice adds to the songs make them all very nice. When I was listening to ‘Decade of Glory’ I had never the impression the songs miss something in the releases we’re used to. But it’s ever so nice to hear them in this version every once and a while. I even switched a couple of times to the regular version and played them after each other, just enjoying both versions and the nice stuff Arkona did with them at this concert.

When you like Arkona you should definitely purchase this album. It’s not simply a kind of ‘Best of’ album, it has such nice twists added to the songs it is a real collector’s item, but the good news about that is: It is available for all of you. You don’t have to sneak through obscure places to score a rare version of an Arkona song. Arkona made this easy and you get 26 rare version in one buy with this album.
The only thing missing? A DVD to go with it. It should be awesome to watch this concert on DVD.