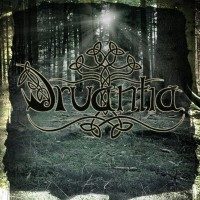 Druantia is a Dutch Folk-metalband which uses all kinds of flutes in their music. Now their line-up has become steady they thought it was time for a demo to show the world what they’re up to.
Listening to a demo you always have to realise what it really is, a demo. It’s not a regular release. Beginning bands make demo to demonstrate what they sound like. Most of the time they are made at low cost. These bands can’t afford fancy studio’s and big names as producer. Druantia was fortunate and managed to record these songs with good equipment.
And that’s the first bonus of this demo, the recordings are done in a nice way and all instruments can be heard clearly. The way things are mixed it can be noticed this is done by someone who knows how to create a good mix. But on the other hand is the mixing of folk-metal a difficult thing to do. When you mix many instruments, like we’re used to in a lot folk-metalbands, you have to make sure not all instruments are in the spotlights all the time.
The demo starts with Valkyrie’s Cry, a song which starts with nice catchy guitars. Not a very unique start but it’s sounds nice at once. After the short intro the song becomes more interesting, because the band maintains the same theme, but makes it all more interesting. The male vocals are very nice with good screams and grunts! A great voice. The female vocals on the other hand are too neat. They don’t make the song more interesting. And the interaction of flute and guitar in the end of the song is a very nice catch.
Ragnarök is the second track of this album. The flutes remind a bit of Dutch bands like focus, in my opinions they should stand out less and blend more with the music. But this is a very good composition with nice alternations in it. And it can be noticed again singer Rik has great pleasure singing this songs, his joy can be heard and this is very nice.
Death of a God has a nice intro in which there’s a role for all instruments. All instruments play nice fierce part in this one and together with the male vocals they can kill any god at once. The female ones are again to neat and tidy in this one, they’re taking away a lot of the tension of the song.

Druantia has done an very good job with this demo. Anyone who listens to this songs and has anything to say about programming bands somewhere can notice immediately this is a very nice band which will do fine as support-act of a band or amongst the first bands in a festival.
Of course there can be improved some things in the music. In a demo it not possible to record everything as often as it should, this will be much to expensive. Minor failures can be heard on almost all demo’s. The flutes play an important part in Druantia’s music and that’s very nice, it gives it all a very nice touch, but in the recordings they should blend in more. But the which bothers the most are the female vocals. They’re just too neat and tidy.
But there are a lot of very nice things about this demo. The compositions are good, it’s catchy, the bands sound is very nice. And the male vocals are GREAT!